On Finding My Look After 60 Years of Searching 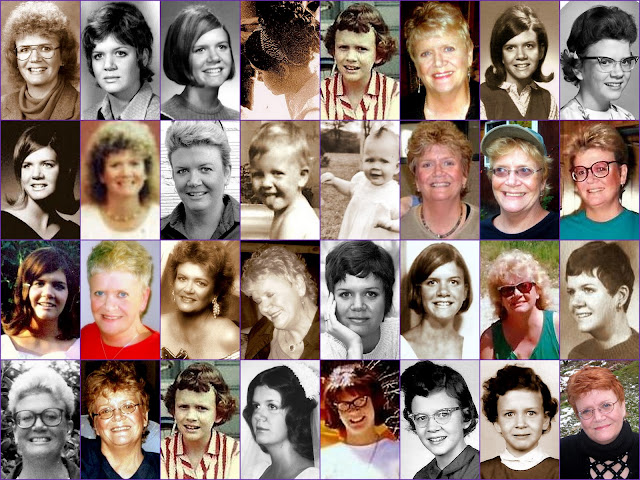 "To grow old and wise, you first must be young and stupid."
﻿Following 40 years of marriage, I lost my husband in the spring of 2009 on the same day my mother died. As the fallout of that emotional nuclear blast continues to settle, the full impact of the result -- an unexpected and unprecedented personal freedom -- is beginning to dawn on me.
My reactions -- enormous grief, shock, despair, worry, regret, faith, hope and at times, even joy -- have given me much to think about. It's all got to come out somewhere, so I figure it might as well be on my blog.
I'm aware that the one glaring attribute lacking from my posts has been humor. I do have a sense of one somewhere, but it's been hard to find in the last couple of years. I was going to say it's been buried, but thought better of using that term. (See? It's in there somewhere. Maybe it's "black humor," but it's funny, no?)
When one of my readers commented on a recent particularly poignant post, "I should know better than to read you at work," it gave me pause. "Jeeze," I thought. "I am going to totally bum out and lose my entire audience if I don't get a grip on this grief thing."
So I vowed to try to find my funny bone again. Truth is, I'm tired of being sad all the time, too -- and that's an understatement, believe me.
Perhaps I've reached the point of Maximum Grief Endurance (MGE). I've noticed on TV shows about treating people with Obsessive Compulsive Disorder (OCD), that therapy includes completely bombarding them with exposure to the very fear that's driving them crazy. The theory is that the human mind simply cannot sustain an extreme level of terror for an infinite period of time. What seems like a cruel treatment actually appears to work.
This always makes me wonder if I rode, let's say, Cedar Point Park's Magnum XL-200 ("the extreme coaster ride by which all others are measured") 200 times, by my 199th trip, I'd just be sitting there expressionlessly, bored. Maybe that's why it's called the XL-200. http://www.cedarpoint.com/public/park/rides/coasters/index.cfm (In my youth I lived near Cedar Point, and it's a blast, by the way.)
The faithful among my so-called followers will notice this is my first post of 2011. That's because it's not easy for me to come up with an upbeat idea. I doubt if I'll ever be as wildly crazy-funny as Murr Brewster, whose "Murrmurrs" blog is one of my favorites, http://murrbrewster.blogspot.com/ -- at least not if I continue to maintain sobriety. (However, when one is "under the influence," as they say, one is inclined to think one is funnier than one actually is, isn't one?)

So to start off with, I thought I'd entertain you with the above evidence of my life-long search for "my look." This staggering display of my failure to feel comfortable with my hairstyle rivals Hilary Clinton's obviously similar misgivings about her appearance as First Lady. For years I tried to blame this on my DNA. Here's a picture of my grandma in her youth, which seemed to explain everything about my hair. I only knew her to have fairly straight, gray hair, so I was shocked when I saw this picture. Unfortunately, I never had the chance to ask her how she felt about her unruly locks when she was young. I've been told her hair was a deep auburn color that was very pretty, but I'll bet she had her moments when she wished for "normal," straight hair. I've definitely had mine, especially back when everyone wanted to look like Cher, including me.

Now that I'm not trying to please anyone with my looks anymore, I simply don't do anything with my hair, except keep it very short so I don't have to mess with it. I love getting up in the morning and not even having to look at it. To quote one of my heroes, Joan Rivers, "Age is freedom."

Maybe next time, we can discuss my weight or my unpopular smoking habit. Or maybe not. Let's just not get too hasty, here, shall we? Oh, and MGE is a made-up diagnosis, but it's pretty real to me.
Posted by Unknown at 5:42 PM