We Are Creating the Coal That Fires This Oven 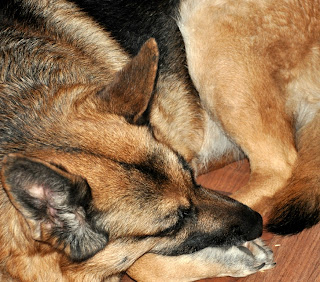 Get yourself a cup of coffee and let's talk shop. I heard an interesting interview last week on NPR's Morning Edition, which I'm sharing here for the benefit of my coworkers, the "legions of unpaid bloggers."
In it, we are described as a bunch of "showoffs," which, at heart I suppose we are. I know I am, at least. My blog is pretty much all about me. In my last post I included 40 pictures of myself, so that's pretty clear evidence of my egocentricity.

Speaking of photos, check out this one I took of my old Sadie dog as she lie curled up against the cold this morning.
I share this here for your enjoyment. If you leave a comment saying you like it, then I will be happy. It's just that simple. I live for feedback; it's at the heart of why I do this.
What is your altruistic purpose for blogging? It seems like all bloggers basically write about their own lives. Is there anything wrong with that?
Not in my opinion. The world needs more entertainment, especially if it's free. Having a feeling of being connected with others is healthy, too. It's good for the soul to remember we're not alone in the world. It sure has helped me.
My fellow bloggers, have you ever asked yourselves, "Why am I doing this?" Then read this interesting insight from writer David Carr, whose blog has attracted nearly 300,000 followers.
February 15, 2011 - RENEE MONTAGNE, host: The sale of the Huffington Post to AOL for $315 million made at least one person very rich - actually, probably a couple of people. But that huge purchase price has led many of its legions of unpaid bloggers to wonder, what about us?
David Carr is the salaried media columnist at The New York Times, but he's written about and experienced the phenomenon of unpaid content and he's here to talk to us a little bit about this deal.

MONTAGNE: You titled the piece that you wrote in The New York Times yesterday "A Nation of Serfs," meaning what? Meaning people on property that's not their own?

Mr. CARR: Yeah. When you talk about people who provide platforms - be it Facebook or Twitter or LinkedIn or Koora - they own the interface and the technology. Huffington Post is a little different deal because they are a news platform, but again, a lot of people work for them in unpaid ways.

And as we all we all Twitter away and type away and update our Facebooks, we're creating the coal that sort of fires this oven and creates these values, but they continue to own the lands.

MONTAGNE: Right. And there's somebody at the top who benefits mightily in that kind of old-fashioned, capitalistic way.

Mr. CARR: Well, let's be honest, it's always been .. it's nobody ever got rich - well, very few people ever got rich writing. What's unusual about the era that we live in is not that content comes cheaply. You know, writing beats working, so I'm going to choose it every single time.

But the fact that it seems to be dropping to a price of zero - if you look even beyond the social networks and The Huffington Post - content farms like Demand Media, where they're employing professional journalists, but they're being paid at the rate of $10 or $15 or $20 a story. As content doubles every year - becomes more and more ubiquitous - the price of it is bound to go down, as is the compensation.

MONTAGNE: Well, the way you describe though, the charm of being able to write for free, it's very much an opportunity to use your wit with an audience.

Mr. CARR: Oh, it's a great place for showoffs, there's no doubt about it. Those of us who write for a living, we're among the first and early adapters of Twitter, along with technical people. And it's not as if we get nothing in return. We're able to promote our work, much of what I Twitter about.

Sometimes I, you know, write about my commute home to New Jersey on the bus, but other times I'm promoting my work or the work of others. I've been rewarded with almost 300,000 followers, and those people are a kind of social and business asset. I can't really put a number on them, but there's some value in that.

Mr. CARR: Yeah, you're talking a big corporate blob that's worth $2.2 billion in terms of market capitalization. And while I'm sure people are interested in accessing an audience, you'd have to think that a lot of people at the Huffington Post were somewhat politically motivated to contribute to the civic common and what they felt were progressive and additive ways. It feels a little different when you're sending that copy to a big gigantic media conglomerate, at least I think so.

MONTAGNE: David, thanks very much for joining us.
Mr. CARR: Oh, an absolute pleasure, Renee.