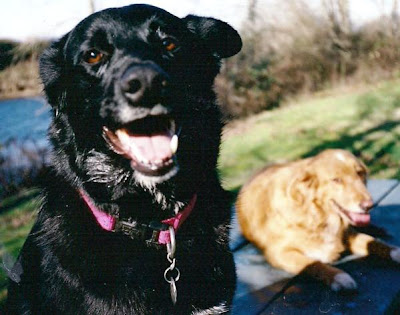 ﻿
I'm not a dog snob. For the first 30 years of our marriage, we never had the money to buy an AKC dog, so a series of lovable mutts﻿ shared our lives. Probably the most memorable and clearly my favorite was a black-and-white, natural-born comedian named Hoo.
That's her above, laughing. Behind her is a our Golden Retriever, a pound puppy we named "Wuzzy." As a wee doggie, she looked like a little bear, so her name came from the nursery rhyme, "Fuzzy Wuzzy was a bear.." She went by "Wuz" most of the time.
We got Hoo for free from a neighbor who owned her mother, a purebred German Shepherd. Her father was unknown. A half-shepherd sounded good, so we brought home the sweetest of 10 little pups.
How a dog gets its name at our house is usually left up to fate. In Hoo's case, it happened when another neighbor came over to see our new puppy.  "And this is who?" he asked politely, picking her up. In a light-bulb moment, I answered, "Yes, this is Hoo." Having one dog named Wuz and another named Hoo had potential for being very funny, I remember thinking. 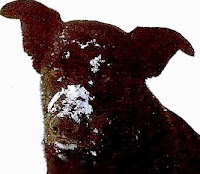 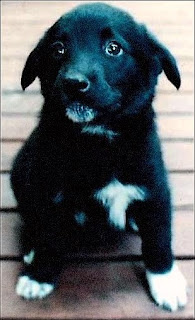 Hoo didn't know who she was yet when she first came to live with us. As she grew, our hopes of owning a dog that looked like a German Shepherd began to fade. It wasn't long before her personality began to emerge as well. Hoobie was a nut. You could tell just by looking at her. She received her full name, Hoobert Heever Henderson, from something I read one day in a Reader's Digest. It was a short story about the first-ever live radio broadcast of a presidential address to the nation. It marked the end of the golden era for newspapers, which had long enjoyed a media monopoly as the sole source of news coverage.
President Herbert Hoover was standing by as the broadcast was about to begin. The announcer, incredibly nervous and daunted by his historic task, ceremoniously cleared his throat. In a high-pitched, quivering voice, he then effectively ended his broadcasting career by leaning to the mike and saying, "Ladies and gentlemen, the President of the United States, HOOBERT HEEVER."
I've always imagined this epic blunder having been followed by an audible gasp of horror from all the people in the radio station control room. I've also pondered the possibility that if hundred of thousands were listening to their radios at that moment, the announcer's huge faux pas may have caused a tsunami of collective gasps that rolled across America, eventually sending out a global "OMG!" Perhaps the massive intake of breath created an atmospheric change, a moment of shock so intense it was like a  "shot heard 'round the world."
But that's just speculation. The Reader's Digest article didn't say whatever happened to the poor guy. I hope he didn't go out and jump off a building. The country was in the Great Depression, after all.
Humiliation of this scale must have been hard to handle. Hopefully he found another job in a field where stage fright couldn't sabotage him. Perhaps he turned to Demon Rum and became a bum, like many men down on their luck in those days.
Hoo knows? Yes, she does but she'd never tell. Hoo's tail must be continued, for she lived to be 16 years old and her legendary antics were many. Stay tuned, then. More Hoo is coming for you.
Posted by Unknown at 4:17 AM