Them Two Sure Was Good Ol' Gals 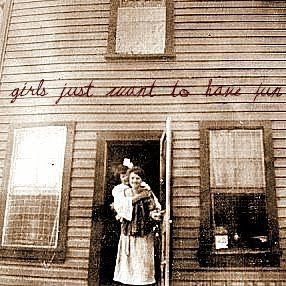 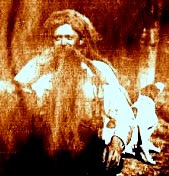 These two women, identified only as Minnie and Daisy, lived in Dixie, Idaho, around 1903. They were most likely "camp followers," as female opportunists were called who traveled to remote mining areas to seek their fortune.

Adventuresome girls, like merchants and many business entrepreneurs, made a lot of money supplying needs of prospectors like this odd-ball character at left.

Minnie and Daisy were cashing in on the last of the Old West gold rushes, the Thunder Mountain gold strike of 1898.
Located deep in Idaho's extremely remote and nearly inaccessible interior, the diggings nevertheless attracted thousands of men at the turn of the 19th Century.

Tiny Dixie remains today the last trace of civilization for travelers heading into the rugged back country. Beyond its few homes, cafe and store, the road ends and the going gets much tougher.

I've long been interested in the lives of women who came West a hundred or more years ago. I think I'd have preferred to cast my lot with the likes of Minnie and Daisy than to have been isolated with a no-fun husband on a homestead bearing children every-other year.

I probably would have balked about halfway through the trip if I'd allowed myself to be talked into going West on a wagon. I can imagine thinking, "This totally sucks;" getting madder and madder.

I can relate to an account of a fed-up woman who finally lost it on her way to the Oregon Territory in 1847. Sounds like a full-blown, pissed-off female snit fit:

"This morning one company moved on except one family. The woman got mad and would not budge nor let the children go. He had his cattle hitched on for three hours while coaxing her to go, but she would not stir. I told my husband the circumstances, and he and Adam Polk and Mr. Kimble went and took each one a young one and crammed them in the wagon and her husband drove off and left her sitting. She got up, took the back track and traveled out of sight, cut across, and overtook her husband.

"Meantime, he sent his boy back to camp after a horse that he had left and when she come up to her husband, he says, "Did you meet John?" "Yes," was the reply, "and I picked up a stone and knocked out his brains." Her husband then went back to ascertain the truth, and while he was gone, she set one of their wagons on fire, which was loaded with their goods. The cover burnt off and some valuable articles were lost. He saw flames and came running, and put it out, and then he mustered spunk enough to give her a good flogging." ("Women's Diaries of the Westward Journey," by Lillian Schlissel, copyright 1982, Schocken Books, New York.) http://www.amazon.com/Diaries-Westward-Journey-Lillian-Schlissel/dp/0805211764/ref=sr_1_1?s=books&ie=UTF8&qid=1283631296&sr=1-1

As a veteran of many heated discussions with my late husband in our nearly 40 years, I think this woman had decided she was done with this marriage. She had to have known when she'd crossed the line where her husband was sure to become enraged. (I think it was probably when she lit the wagon on fire, don't you?)

I knew where that line was in my marriage and trust me, I always backed off of it. Every relationship has its loaded emotional nuclear warheads that, once fired, pretty much signal the end of the partnership.

I've always wondered what happened to this couple but of course there's no way of knowing. Maybe when she finally got out West, the woman dumped her old man and ran off to San Francisco.

That's what I'd have done, especially after being "flogged." Figuring anything would be better than that, I'd have hooked up with some good old girls like Minnie and Daisy, made a bunch of money and perhaps even had a few good times along the way.

Maybe that's because I've come to realize the enormous value in having at least one really good girlfriend in my life. The support and companionship of your own gender is priceless.

We all need to vent to someone we can trust sometimes. It keeps us from torching the wagons.
Posted by Unknown at 11:47 AM