How I Passed A Cardiac Stress Test 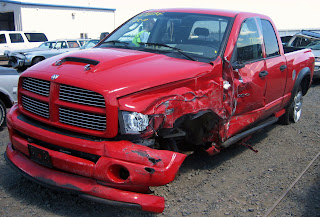 Here's a photo of what's left of my big, pretty Dodge Ram after my son nearly had a head-on collision with a motor home.

This happened while he was taking my granddaughter home to her mother's. Yes, OMG, he had Anna with him.

No one was hurt in the wreck. That's the good part.

My late husband and I bought this truck brand new five years ago and I had just finished paying it off. Now it's totaled. Ironic, yes?

I found this recent near-tragedy quite emotionally troubling, having lost my husband in a motorcycle crash just last year. You know it's bad when you have to remind yourself, "Just breathe."

The often-heard phrase from friends, "It could have been much worse," meant to comfort me, is the very idea that makes me weak in the knees to contemplate.

Thank God no one was hurt. Absolutely grateful for that, I am, indeed.

I'm also relieved I didn't have a stroke or heart attack when I found out about it. I did have a giant panic attack of sorts when my son called to say, in trembling voice, "Mom, I've been in a wreck." Hearing that totally freaked me out so bad I very nearly fainted, which freaked me out even further. Panic attacks feed on themselves, have you ever noticed?

I've seen people in the movies faint upon receiving bad news but had never really experienced that extreme-shock reaction in real life. It's like your brain just goes, "Nope. I am not hearing this, I am definitely not dealing with this, and I am out of here, right now." It's a weird sensation. It felt like my heart stopped, but of course, it didn't.

I have advised my son, should such an unfortunate incident ever happen again, to please begin such phone conversations by saying, "Mom, we're alright, but ..."

So now I am looking to buy another vehicle, which is one more thing I've never done without my husband. Sometimes I wish so badly that I could just call him up and have him tell me what to do.

That ain't happenin', though, so I'll just have to wing it once again and delve bravely into the strange world of "man stuff."

Last year at about this time I was pondering getting in my firewood supply for the winter, which had always been another one of my husband's domain. Followup: Red fir is my choice as No. 1, followed by Tamarack. A blend of the two makes a nice mix in my particular stove. No more Birch for me, however; burns too hot and causes creosote in the stove pipe. The darn bark is unruly, too.

Live and learn. Roll with the punches. Such are the cliches I live by these days.

Could an angel on a Harley have been there to intervene? Well, actually, I thought that was fairly obvious. Of course he was.
Posted by Unknown at 12:13 PM