Old Photos, Windows to the Past 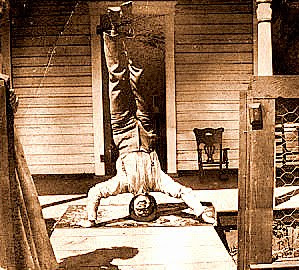 I love old photos; I always have. Aware of my fondness for pictures from the past, people give them to me. I have lots of them.

Sometimes I know who the people are in the pictures, sometimes not. I like to examine everything in an old photo with a magnifying glass. I pretend I was there.

This is a picture of a guy named Sumner Stonebraker standing on his head on his brother's front porch in Stites, Idaho, in about 1903. The Stonebrakers operated a pack train hauling supplies and mail into Idaho gold miners.

I made a little slide show of some of the best of these rare pictures for YouTube, which I just added here for you to watch. It's interesting, I think, even if you don't care as much about Idaho history as I do.

It's a well-known fact in the newspaper trade that editors become historians when they retire. It's just natural.
Even while I was still working on newspapers, I always had a sense of recording history.

I love to go to a library and spend all afternoon reading really old newspapers on microfilm. The stories in them are usually hilariously slanted by today's journalistic standards. Early newspaper publishers were usually guilty of shameless "boosterism" when writing about their newly formed little towns. 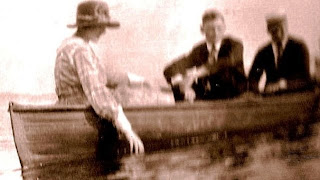 This old photo is of my grandmother in a canoe in about 1919. I love the way she's trailing her hand in the water; it shows her serenity at that moment. It makes me glad to know she was happy then.

That's her younger brother, my great-uncle, to the right of her. I can't tell who the two other people are because they're too out of focus, but it doesn't matter.

I love the picture just the way it is. Aside from adding a little tint of color, I did nothing to enhance it. It has the ethereal feel of a soft watercolor painting, I think. It's almost Impressionistic, in a way, but maybe it's just the era and how my grandma was dressed. Whoever took it may have felt it wasn't a very good picture. I'm just glad it didn't get thrown away, and that now, it's mine.

I love to scan and share these windows to the past. I hope you like them, too. I'll post more when I can.
Posted by Unknown at 9:51 PM