A Sunny Day, a Lake, and a Little Girl 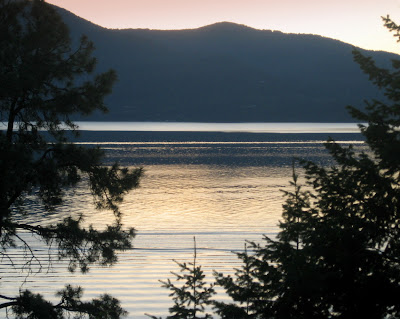 Lake Pend O'reille (pronounced "Pond'-er-ay") is near my home in the Idaho Panhandle. A natural lake, it was formed by glaciers long ago. Encircled by mountain peaks and deep-green forests, it's Idaho's largest lake and in my opinion, its most beautiful.

You can boat all day on Lake Pend Oreille and still not see all of its surface area of 148 square miles. It is 65 miles long, and 1,150 feet deep in some regions, making it the fifth-deepest lake in the United States. If you find this incredibly interesting, here's a link to learn more: http://www.visitidaho.org/thingstodo/view-attraction.aspx?id=30620.

I'm very fortunate to have a good friend who owns a cabin on the eastern shore of Lake Pend O'reille. I took this photo last week from the second-story deck of her perfect hide-away after a full day of playing in the sun in the crystal-clear lake water. My son, granddaughter, friend, our dogs and I swam, rode in a canoe, snorkeled, built a fire after dark and in general had a wonderful time.

It was while riding back to the cabin behind my son on a four-wheeler, with Bric running happily alongside, that I had the odd realization that I actually felt happy. Wide-grinning, childish, light-hearted happy.
I'd almost forgotten what it felt like to be so glad to be alive. I was happy that I hadn't missed that day. I cherished it, very conscious of being in the moment..
Maybe it was my impish, high-spirited granddaughter, Anna, who broke my long-running gloomy spell. She is a joy, to be sure; she brightens up the world around her. I'm not sure if she's aware of her positive effect on me.
I'm reminded of a good movie from a few years ago entitled, "As Good As It Gets," starring Helen Hunt and Jack Nicholson. There's a scene in a fancy restaurant when Helen realizes she is very under-dressed, and she's mad at Jack for taking her there without telling her what to wear. She demands that he give her a nice compliment to make up for it.
Jack thinks for a minute, and then says, "You make me want to be a better person." Helen melts, of course. She cries a little, because that's the nicest thing anyone's ever said to her, she tells him.
I'm not sure if Anna, who will be only seven next month, could really grasp the meaning of such a profound statement yet. She might say something like, "But Nana, you're not a bad person!" Then I'd have to try to explain, which I really can't, at least not in a young child's perspective.
But one day I will say to her, "Anna. you've always made me want to be a better person." And I'll hug her and say "thank you," and let her know that because of her, I am.
Posted by Unknown at 3:57 PM