My Flag's Flying Today For All Vets 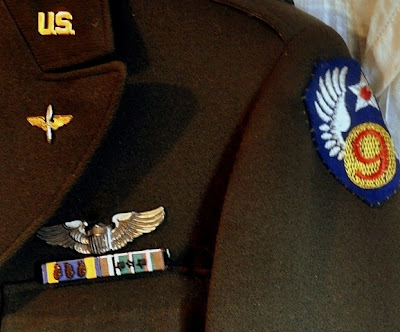 I'm making a conscious effort these days to resist looking back at my life with regret. It's impossible, of course, to go back and change anything, so what's the point?

On this Veteran's Day, however, there is something on my mind I'd definitely do differently, if I could. I wish I'd spent more time talking to my dad.

Isn't it remarkable how our perspective of life changes with our age? When my dad passed away at 64, not once did it enter my mind that he was "too young." It just seemed like he got old and died, like people do, end of story. Now, his death seems almost tragically premature. He wasn't much older than I am.


He was a quiet guy; it was hard to get him to talk about his WWII days and I never persisted questioning him out of respect, I suppose. But how I would love to know what was going through his mind on the night of June 5, 1944, the eve of the D-Day Invasion.

I inherited my dad's uniform, shown above, after my mom passed away last year. With it came a treasure of his WWII memorabilia, such as flight logs, photos, and his "short snorter." My dad took this small black-and-white photo of one of his crew mates, Cpl. Howard Bell, posing on a destroyed German bomber at their Chateaudun base.

A pilot in the 94th Troop Carrier Squadron, Dad was preparing to fly a huge, black-and-white-striped, unarmed cargo plane across the English Channel to Nazi-occupied France. The weather had been terrible, but everyone wanted the invasion to get underway. They were tired of waiting.
That's my dad inside his C-47 in the other old photo, helping men of the 101st Airborne board on the eve of D-Day. The paratroopers were heavily weighed down with all their gear. This shows a lot about Dad's character; the other pilot is just standing there in his life vest, waiting, his back to the photographer.
Once over his designated drop zone above Normandy, Dad had to turn on a green light,  the signal for about 40 men of the 101st Airborne to jump out of the plane into the darkness, smoke, flak and deafening noise of battle. I know their safety had to have weighed heavily on my father's heart that night -- and for the rest of his life.
Those are the guys my father could hardly talk about in later years, except to say, "They were the brave ones, not me," sometimes adding, teary-eyed, "those poor suckers."

My dad did not drop them in the wrong place, from what I've been told. There was just so much "heavy ack," smoke, and confusion that the men were clearly jumping into "the mouth of Hell."
Most combat veterans I've known downplay their own wartime service. They point to pictures of long, neat lines of white headstones and say, "I didn't do anything; they did." You know, probably even if I'd had more time with him, Dad wasn't going to go there with me, ever.
So if you ever hear some guy in the back of a bar bragging about being in combat in some foreign war zone, I'll bet he's lying just to impress his buddies.
Real combat vets, at least all the ones I've known, not only don't flaunt it, they hardly ever bring it up. It's not something they want to dwell on.
This is their one day of the year, though, to be reminded of their bravery and service. If you see a vet today, just smile and say, "Thanks." That's probably good enough; we don't want to cause discomfort.
But tonight, just take a second to ask God to bless and protect them all. They've earned it.
Posted by Unknown at 10:09 AM