This Thing We Call Life

I had planned to write this post about special dogs we've loved over the years, but it seems too tough of a topic for today. Here's the photos, but the story's different. I want to tell you a story about a good friend from my teen years named Dawn. She and I have kept in touch with for many years.

She's a widow now too, and has been a valuable source of support. I didn't make it to our 40th high-school reunion in 2009, but we did manage to get together one day for lunch last summer. Isn't it funny how, even if they look quite different, when you see someone again after several years, once they start talking, all the time falls away? When I'm with Dawn, it's 1967 again, or so it seems. Her parents lived right behind mine and we were in the same grade at school, so we couldn't have avoided each other even if we'd tried. It was a good thing we hit it off right away after I was involuntarily transplanted to Boise in the eighth grade.
After being no-bosom buddies (yuck, yuck) all through school, we went our separate ways after college. We each married handsome young men, and I remained in Boise while she moved to a remote Alaskan fishing village with her husband﻿ to teach Eskimo children.
Teaching in Alaska's extreme conditions was a popular move for young couples with education degrees in the 1970's. It paid very well. The oil pipeline was under construction then, too, so we had several friends who left Idaho for the Far North to make big money.
Such pilgrimages are still going on, since Idaho hasn't had an economic boom since its last gold rush and that was quite some time ago. No one seems to come back and say they hated their Alaskan experience and Dawn and her husband were no exception. They loved living among the Eskimos and ended up staying about ten years.The minimalist lifestyle of the natives afforded few luxuries. Their traditional sources of food and clothing were whale, seal, fox and fish. This proved to be adequate, Dawn said, but she constantly craved a fresh green salad.
No fresh produce could be flown into their village due to the extremely cold temperatures. So Dawn decided to try to bring two heads of iceberg lettuce home from a trip to Fairbanks. To protect them from freezing, she stuffed them up in her coat, planning to keep them warm there for the entire flight. This vision of my skinny friend with two heads of lettuce crammed up her coat is amusing in itself, but it gets better. As she tried to negotiate her way to her seat, while jockeying the ton of other stuff from town, she was mortified when both heads of lettuce escaped and rolled down the aisle like a pair of pale-green bowling balls.
Dawn turned red with embarrassment (she does that easily), but quickly learned in that part of the country, no one bats an eye at the sight of two heads of lettuce coming at them down an airplane aisle. The produce was simply scooped up and politely returned by another traveler. Here you go; no problem, ma'am. She wondered later if everyone else on the plane was also cradling lettuce in their coats.
My friend had two babies, Emily and Jessica, while living in their Arctic home. This seemed a little nuts to me at the time, but Dawn's always been quite a trooper, especially when it comes to the Great Outdoors. Now that I think about it, she still is. A little nuts, that is.

Another time, she took her little girls on a rare trip to the city. Emily was about four years old and Jessica, two. They had no TV at home, so the girls had never seen a movie (VCRs hadn't been invented yet). So off they went to see a Disney classic on the big screen. Dawn wasn't into watching the movie as much as she was seeing her kids' reactions as they laughed and clapped through the childrens' film.
When it was over and the lights came on, Dawn prepared to leave. When she looked to see if she had both girls, she was surprised to see Emily still sitting in her seat, weeping.  My friend was shocked. It had been a happy movie with a great ending, she thought. 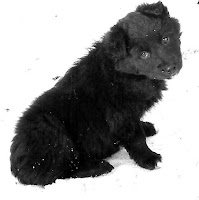 "Why are you crying?" she asked little Emily, who was the very picture of despair, tears rolling down her cheeks. "B-b-b-because it's ov, ov, o-ver," Emily blubbered, letting loose wioth a full-blown wail. "You're crying because it's over?" Dawn asked, adding, "Oh Honey, we'll do this again sometime."  All parents tell their kids that when they're trying to get them out of a place if they don't want to leave. It works for a few years, but as they get older, children begin to realize there's a catch to this thing we call life: You can't go back, you can only go forward.  You can revisit special places or look at pictures of past times, but the experiences,  exactly as you had them, can never truly be relived.
I've been thinking about this since last month when I wrote about our dog, Hoo, and promised a follow-up. Looking through pictures of the 16 years Hoo enriched our lives, I was reminded of so much happiness I had with my late husband.
Sometimes I think I'd rather recall the times when we weren't getting along so well. It's easier. Don't get me wrong. I'm very grateful for my 40 years with my husband. "You should be glad for what you had," says my best friend, who is divorced. "I always wanted a marriage like yours, but I never had it," she reminds me when I get down.
"I know," I reply. "I am glad." Lately, though, I've been thinking about Emily in the theater. I can totally relate to the reason for her tears when the lights came on.
There's only one difference: I do my crying in the dark.
Posted by Unknown at 10:10 PM