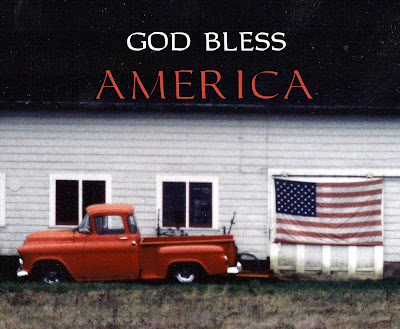 I shot this scene several years ago on a farm just outside of Canby, Oregon. It was during the first President George Bush's mercifully brief but largely ineffective Gulf War. I can't even remember what the catch phrase for that one was, but I think it was Desert Storm.

I've always wondered if this farming family had someone away on active duty back then. It was after the days of displaying gold stars in your window and prior to tying yellow-ribbons on your mailbox to signify a family member was away in wartime service.

I come from a veteran-proud family, dating all the way back to the Civil War.  My deepest respect goes to my grandpa, who served as a foot soldier in the American Expeditionary Force of WWI in the trenches of France.

One night in the Argonne Forest in September of 1918, he failed to hear the warning whistle and did not wake up in time to get on his gas mask quickly enough as an insidious, creeping cloud of low-lying chlorine gas wafted over him. He kept a tiny diary that describes it.

All was not quiet yet on the Western Front when my grandpa was there by any means. I have a brass table lamp he made out of an artillery shell from the war. It's one of my treasures now, but what a depressing daily reminder that must have been for him.

The "war to end all wars" finally did come to an end at 11 A.M. on 11/11 of that year. My grandpa served fewer than six months "Over There," but the debilitating effects of that time on his life would be forever felt by my family.

He suffered terribly from "shell shock," which we now might call a severe case of Post-Traumatic Stress Disorder (PSTD). I can remember my dad saying that whenever a car backfired, my grandpa would dive under a table.

Poor guy. I never knew him outside of the V.A. hospital in New York where he spent the final 38 years of his life confined to a psych ward, described in medical records as "psychotic" and "totally incompetent."

I wonder how he felt about 4th of July fireworks? Probably was not a big fan. Neither am I.

Hopefully, since my generation of combat veterans came along from the Vietnam War, who generally brooked no bullshit about anything, the myth that bloody battlefield combat is anything to be glorified might have begun to be dispelled.

Francis Scott Key's soaring national anthem about "bombs bursting in air" is an example of how brutal warfare was propagandized as being an attractive thing for young men to do in past centuries. After all, if they'd known the truth, who'd have signed up to go?

I once read that prior to WWII, among the plethora of horrific sounds that assaulted their ears during raging battles, the thing that veterans hated hearing the most were the terrified screams of hundreds of horses and mules being injured and killed.  I'd have to say that would have bothered me quite a bit, too.

Thank God we don't also have a national tradition of people in pairs running around in horse suits making awful horse-screaming sounds and then falling down in fake agony to look forward to this weekend, along with the bursting-bomb instant-replay effects. .

The whole idea of setting off a bunch of highly explosive materials in July, in the dark, has always struck me as a bit insane for several reasons. Around here,  it's often tinder-dry at this time of year. There have been a few spectacular, undesired side effects due to a little town's over-zealous efforts to put on a huge firework display. This year it's fairly green yet, so hopefully firefighters can relax a bit.

The 4th of July certainly ranks No. 1 as the most-despised day of the year for my German Shepherd dogs, who always shiver and pant underfoot all evening during fireworks. Despite their formidable reputation as a breed favored for military service, my three would have never made it as Dogs of War.

Perhaps early conditioning is the key, but I was always too preoccupied with teaching strict housebreaking and no-chewing rules to think of also exposing them to loud bangs. Seems kind of counterproductive anyway, since the only loud bangs my puppies ever heard were of a disciplinary nature. It was the sound of the things I threw at them hitting the wall behind their heads when I caught them squatting to pee in the living room.

Phooey on fireworks? Were I still writing this as a newspaper column, I could expect some letters to the editor in a few days decrying my anti-fireworks stance as un-American.

Baloney. I simply think that recreating battlefield sounds and sights of deadly nighttime bombing attacks is cruelly insensitive to the nerves of combat vets, very troubling to the well-being of dogs, a huge fire hazard and frankly, just a stupid way to celebrate Independence Day. It's left over from a bygone era. Let it go, people!

I mean, how many times can you say in unison with a crowd of other people laying on their backs in the dark on blankets in a football field, "Ewwww," followed by, "Ahhhh"? It gets old pretty fast -- or maybe it's just me that's getting old.

At any rate, I'll bet my grandpa would have agreed.

For Brother Steve - Semper Fi
Posted by Unknown at 11:16 PM