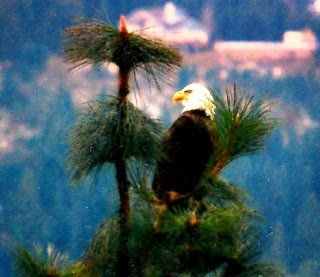 I had a four-decade-long crush on my late husband, Roger. The thought of losing him was unbearable to me all those years. When we were first married, I worried he would be drafted and sent to Vietnam. My big, handsome hunk was definitely a 1-A prime candidate for cannon fodder.
One evening after watching the mounting daily death toll from that sad war on the evening news, I had an inspiration. "If I die before you," I said to Roger, "I'll come back as a mourning dove, and every time you hear that bird's call, that will be me, saying I’m here and I love you."
Roger thought about that for a minute, then said, "If I go first, I'll come back as a red-tailed hawk. You'll see me most often on the wing. Every time you do, it'll be me, saying hi." As I looked at him a bit disappointed, he quickly added, "And I'm here, and I love you." We both laughed.
We never forgot that conversation. During thousands of miles I rode behind Roger on his Harley, sometimes a hawk would suddenly rise from a field and fly over our heads. Roger would always reach back, squeeze my leg and nod at the bird to make sure I saw it, too. That's the joy of being on a motorcycle; we would have missed it in a car.
Similarly through the years whenever we heard a mourning-dove call, I'd give him a hug or at least eye contact to reaffirm our everlasting love. Our "afterlife-bird promises" were a secret pact we never shared with anyone.
One horrible day in May 2009, Roger fatally crashed on his Harley. The night he died, I had left the hospital to come home, exhausted. About 9 PM, Roger’s sister called and said he was gone.
Daylight was fading as I walked out onto our deck to absorb this news. My action startled a big bird sitting in the top of the closest tree to our house, just 10 feet away from the deck railing I was leaning on. With a lot of loud flapping, a magnificent Bald Eagle arose from the tree top.
In a glorious display of graceful strength, its wings making a "whoop, whoosh" sound, the giant bird flew upriver, eventually disappearing around the bend. Rays of warm, peachy light from the setting sun reflected off billowing clouds on the horizon. The glow bounced back up from the river below to illuminate the bird's wings in a surrealistic, stunning scene.
I knew this was an all-out display of God's glory just for my benefit. I had absolutely no doubt about that.
Dazed and drained by the day’s sorrow, I stood in awe, watching this nation's symbol of freedom until it was out of sight.
I spoke to Roger, who was now free, no longer lingering between life and death in the sad hospital bed where I'd last seen him. "Wow, Hon," I said. "You really outdid yourself. That was very impressive."
I didn't bother to try to try to figure out how Roger was going to hear my words, but I knew he would as I smiled and continued to speak to the love of my life. This became a habit I continue to this day.
"I should have known you'd want to ride into Heaven on something bigger than a hawk," I told him. Turning away, waves of tears crashed through my fragile facade, falling from my face into my hands.
Hunting for my Kleenex box, I sobbed in earnest, unable to stop the growing alarm in my head that was screaming the saddest of all my unwanted thoughts: "Now I am alone." I turned the knob and stepped blindly into the rest of my life. It was suddenly dark.
Two years later as I write this on a cool but bright-green spring evening, I am comforted by the soft cooing of a mourning dove. He is right outside my window.
Posted by Unknown at 2:25 PM