The Milledgeville in Me 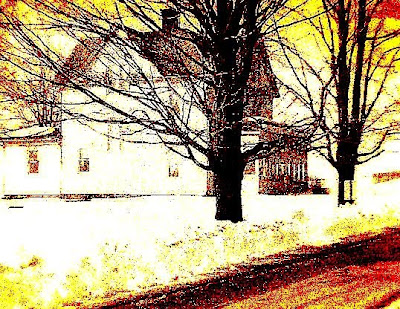 I've been thinking a lot lately about my childhood. It's probably because after having been with my late husband for 40 years, I'm trying to figure out who I am without him. It seems a logical part of the process to try to remember who I was before I met him.
The picture above is of my great-grandmother's house in Milledgeville, PA. I looked it up on Goggle Earth and was glad to see it's in good shape, although it looks different now than when I lived there in the 1950s.
My great-grandpa died in this house in 1938 after being severely burned while trying to start a fire in a stove using kerosene. My great-grandma lived out the rest of her days there for the next 25 years, until she passed peacefully at 93. She attributed her longevity to clean living, hard work, and sassafras tea.
This time of year during my childhood invariably included an annual trip to the nearby woods to gather sassafras roots. It took nearly all day, with Mom doing the tree-spotting, and Dad, the digging. It was always cold and dreary; the ground was usually muddy.
Once we got home with a full sack of roots, Mom would wash each one before beating it to a pulp with a hammer. Then she'd simmer a pot of the mess for at least an hour, until the water had a reddish amber color.
The resulting tea had a heady, distinctive aroma, sort of a cross between root-beer and Great Grandma's liniment for her rheumatism. If I caught a whiff of brewing sassafras at this moment, it would take me right back to those days. I've never smelled anything else quite like it.
The finished product had a bite to it, even when tamed for us kids with sugar and milk. The liberal addition of milk to my cup of tea made the little woody flakes floating around impossible to ignore. They were hard to extract with a spoon, but I'd spend an inordinate amount of time trying, which served as a lame but effective stalling technique.
I can't say as I remember the digs as a lot of fun or the tea as a tasty treat. It was more like a wintertime tonic, a family tradition we believed was good for us. Since then, however, sassafras has been shown to be carcinogenic. So much for Great Grandma's health tips.

Here's a picture of my other grandma's house, just down the road from my great-grandma's. My mom, an only child, grew up here during the Great Depression.
Her father, my grandpa, was in poor health from being gassed in the trenches of France during World War I. He left home in 1935 to enter a Veteran's Administration hospital, never to return. 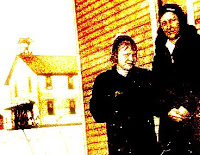 My grandma lived on alone for 33 more years after her husband left. Here's a photo of her and my mom in about 1939, with the old Milledgeville School visible in the background.
In my quest for self identity, it's sometimes helpful for me to remember my Milledgeville roots, so's to speak, sassafras as they may be. Both of my grandmas lived for many years after losing their husbands. They carried on alone because that was their nature and their upbringing; to do anything else was not an option for them.
My mom had her own battle with widowhood, living alone for 22 years after my dad died. They were married for 46 years. Their simple wedding took place in my grandma's home in 1942, right before my dad took off to fight in World War II. I can imagine what was going through my grandmas' minds that day.
Thinking about all this has made me wonder if facing long years of living alone late in life runs in my family. Whatever the case, I'm up to the challenge. I believe I'm capable of doing many things without my husband. It's just not wanting to that makes it difficult.
If I get too down, I'll try to muster up the Milledgeville in me. It's a brave spirit of toughness, endurance and duty. It's worked for three generations of women before me, so with such a solid foundation, I should be all right.
Posted by Unknown at 9:06 PM