A Fire Rainbow Speaks To Me 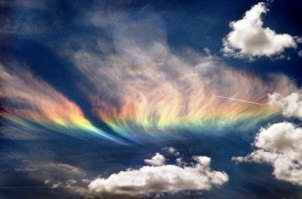 It's a natural inclination we've had since ancient times. Mankind has always looked to the sky for assurance that we're not stumbling around down here on our own, clueless.
Generations of imaginative insomniacs studied the stars and handed down beliefs we now call astrology. I've always dismissed mass-media astrologic predictions as too generalized and open to immensely subjective interpretations.
When you lose someone close, especially a younger person, it's impossible to not wonder why. It's been five months since my husband died from a motorcycle crash on the same day my mom passed away at age 86. Maybe questioning this quirk of fate is why I looked up my astrological chart on this intriguing web site, Infinite Quest: http://www.infinitequest.com/
I'm unsure exactly what a "transit report" supposedly reveals and I'm definitely unfamiliar with such oddly astral terms as, "Pluto in conjunction with natal Chiron," but I typed in my birth data and hit "create report" with a what-the-heck click.
Nine pages of star jargon began to spew from my printer, but I got distracted and ignored them until bedtime. When I finally began reading my specific predictions, I almost sat straight up in bed with amazement.
Even my loudly snoozing sleep mates, three German Shepherds who keep tabs on me even while busy chasing squirrels in their dreams, were momentarily disturbed.
"You are in for a rough time, as structures of your life that had previously supported you come crashing down around your head," began one Henry Seltzer. "You are forced into transformations far more massive than anything you would have anticipated."
"Well now, don't that just about sum it all up nice and neat in a nutshell," I mused out loud to the dogs, who received the "all-clear" tone with heavy sighs. Stretching dramatically as their big heads flopped back down, each one's moan of irritation, relief or lingering concern reflected its level of obsession with my security. My laid-back female, as usual, resumed snoring first.
"How weird," I thought, reading on. It was a long time before I fell asleep.
This dreary Sabbath morning I decided to attack the avalanche my double dose of grief dumped in my in-box this spring. So many expressions of sympathy simply overwhelmed me. I've had no strength to read and appreciate most of them until just recently.
At the in-box bottom linger some cherished emails from my mom and husband's last days on Earth. I've let these lay, dormant and unread, unwilling to dare deleting them without first reading their possible "messages from beyond the grave." Opening the precious few from my husband is as insurmountable as climbing Mt. Everest to me yet.
Maybe because Pluto is in trine with my natal Mercury, I clicked on one from my mom sent in January. The incredibly colorful photo of the sky shown above popped up with this caption: "This is a Fire Rainbow, the rarest of all naturally occurring atmospheric phenomena."
"Oh, sure, Mom," thought this skeptic. "Looks computer enhanced." Curious, I followed the accompanying link. It's pretty convincing. I’d be shattered to learn National Geographic posted a doctored photo on its web site. I believe in their integrity.
"Known in the weather world as a circumhorizontal arc, this rare sight was caught on film June 3 (2006) as it hung over northern Idaho near the Washington State border," I read. It lasted about an hour, according to Nat Geo. That’s a long time for a cloud formation.
"Wow," I said to the dogs, underfoot now, dozing. "That's practically right out our window."
I'd have been impressed to see the unusual celestial display in person. I'm sure the word "sign" would have come to mind.
When it comes to signals in the sky, I have a lot more faith in the Gospel of Mark than anyone's astrological report. In Mark 15:33, we're told of an atmospheric anomaly that occurred as Jesus was crucified: "And when the sixth hour had come, there was darkness over the whole land until the ninth hour."
This might have been an eclipse of the sun by the moon; maybe Seltzer has figured that out. Whatever it was, Matthew 27:45 also describes the strange temporary absence of light that day in nearly identical words. 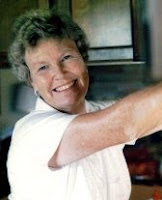 There was more to my mom's email. "Life is a miracle, don't let it slip away," I read, eyes welling with tears. "Open your heart to others, give of yourself each day."
Here's a photo I took of her about 20 years ago as she was happily getting plates out of her cupboard because we were there for dinner.

This method of communication we call the Internet is a marvel some folks before our time would certainly have deemed miraculous. Maybe it is.
Was my mom's message left unread because it means so much more to me now than when she sent it 10 months ago?

On a June day in 2006, could the cirrus clouds overhead have been at a perfect elevation with just the right amount of ice crystals, so that when the sun hit the heavens, the Lord could say, "Look up here! It's going to be okay! This is what my love looks like!"

This I do know: I didn't miss the Fire Rainbow. Thanks, Mom
Posted by Unknown at 4:36 PM